Please tell us about some distinctive initiatives carried out by Nagano Prefecture as an “SDGs FutureCity”. 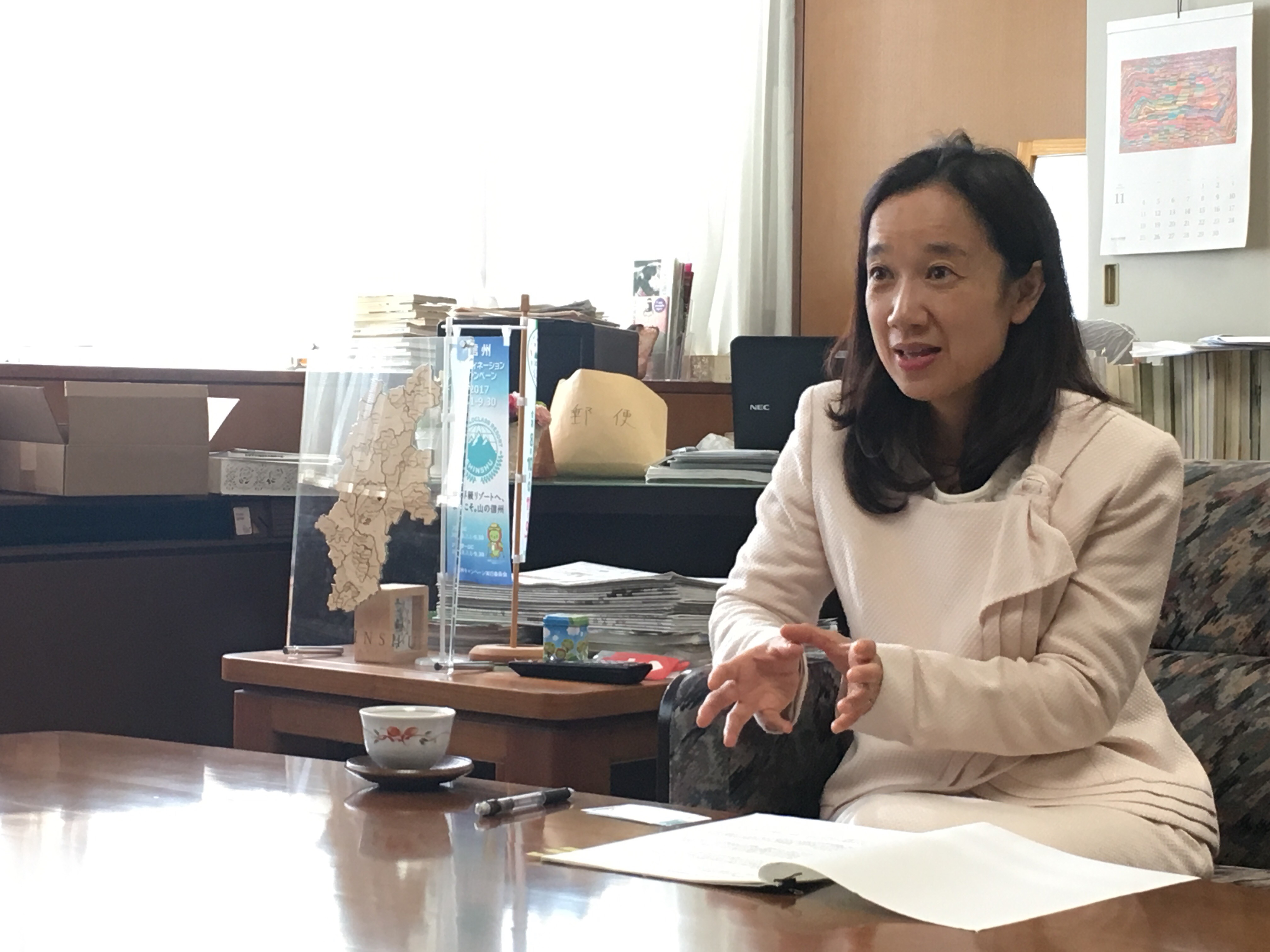 We have positioned the concept of SDGs (Sustainable Development Goals) firmly in the prefecture’s comprehensive five-year plan entitled, “Shiawase (Happy) Shinshu Creation Plan 2.0 ~ A New Era Opening through the Power of Learning and Self-Government”. Now we are discussing within the prefectural office how to achieve the 17 goals, with a perspective of integrating the environment, the economy and society as much as possible. Because one policy can produce multiple effects, we want to carry out such an effort in a proactive manner.

Overcoming poverty is an important pillar of the SDGs. However, it’s crucial that, for instance, the increasing diffusion of renewable energy production which requires a certain initial investment provides benefits also to those who are in tight financial situations. As another example, for the construction of public housing, we increase the amount of insulation so residents can reduce energy costs – with a special emphasis on the child-rearing generation being able to live as inexpensively as possible. These are the kinds of measures we have initiated.

Another project we are carrying out is the promotion of a community space for children, the “Shinshu Children’s Cafe”. This so-called children’s cafeteria started as an anti-poverty measure – i.e., a welfare project – but it is intended to benefit all local children; in addition, it now includes environmental-related goals, such as reusing items, recycling, and cooperating with a food bank.

Until now, people have not showed much interest when anti-poverty measures were at the forefront of activities, but by matching these up with other efforts, such as environment-related projects, mothers of various ages have begun participating in activities.

Initially, when implementing a food drive in the prefecture, there was confusion as to which administrative section – welfare or environment – was in charge. Seeing the situation, I spoke to the colleagues concerned, urging them to implement the food drive; we held a joint meeting and let the project concept sink in. I think that these are initiatives with Nagano Prefecture-like characteristics.

Please talk about the mechanisms and rules which combine efforts towards the realization of the SDGs among different governmental departments.

That’s a difficult issue. Like with Shinshu Children’s Cafe, it’s important to coordinate in line with specific initiatives. In that sense, I think that the role of senior officials is crucial. It’s pointless to just set up a department managers’ conference in the prefectural office, or create a community council. Rather, government administrators are being called upon to make efforts to tie things together in a concrete way.

In Nagano Prefecture, there is a government, corporate and citizen partnership promotion organization called “Renewable Energy Shinshu-net” that was established in July 2011. Under the organization’s auspices, government officials, companies, and citizen groups discuss as equals how organizations are created, how they operate, and how to deal with projects. I feel that I have learned a lot there.

How are things progressing from the standpoint of fostering practical initiatives in the community?

This fiscal year we launched a new measure, called “Shinshu Environmental College”. In order to promote learning about the environment in schools and communities, we are developing a system to encourage the dispatching of lecturers by local companies, environmental organizations and groups, and also assisting with payments of lecturers’ fees. It is still in the trial stage, and there are aspects needing improvement, such as insufficient transmission strength, the necessity of enriching the content of the courses organized by the prefecture, etc.

Making relationships in the region is also important, and I believe that the function of coordinating schools and communities is particularly important. In the next fiscal year, we will redouble our efforts towards dealing with these issues.

Nationally there seems to be a sense that only the term “SDGs” has taken on a life of its own, but what are your views on this?

When I was in the Ministry of the Environment, and was involved with Education for Sustainable Development (ESD) measures, I focused on helping spread the term “ESD”. However, when I go to local communities, there are actually a lot of ESD-like aspects there, with activities which coincide with ESD taking place. Therefore, I now feel that those are ESD – which helps lead to the creation of sustainable societies. It is important to recognize such practices, and support them so that they will have further effect towards SDGs realization.

Please tell us about Nagano’s mechanisms for encouraging private businesses to carry out voluntary efforts towards realizing the SDGs.

When we formulated the “Shiawase Shinshu Creation Plan”, I believe our first steps were thinking of linking each project to the SDGs, and considering projects that integrated the environment, the economy, and society. I would also like to do such linking work in regards to next fiscal year’s projects which are currently ongoing. In the prefectural office, although it is a slow process, I am striving in this way to help ensure that people are conscious of the SDGs.

It will be a difficult task when it comes to promoting voluntary efforts by private business operators. Within the prefecture, concerning solar power facilities, harmonization between the natural environment, the needs of the community, and other aspects has become a problem. Ahead of the nation overall, in Nagano, solar power plants are subject to an environmental impact assessment ordinance; however, there are many plants which are not covered by the ordinance due to their scale. That is an area we need to encourage voluntary environmental consideration by business operators.

In the future, I think that (like in the EU and elsewhere), we should move in the direction of “sustainability evaluations”. In that regard, in Achi Village there were once efforts called “social environmental assessments” of industrial waste disposal sites. Our prefecture has that kind of ‘preemptive’ culture. This may be precisely what partnerships call for.

If SDGs are simply subject matter being listed in a comprehensive plan or the like, they will have no effective power. In addition to all the measures taken by the prefecture as a start, it is necessary to create situations where, even in private enterprises, pre-consideration, inspections and evaluations, etc. are carried out with a consciousness of the SDGs. While ‘borrowing’ the wisdom of various stakeholders, I would like to think about how we can create such a system together.

While keeping our eyes on the direction we wish to go, through specific practices, I would like us to show what the role of an “SDGs FutureCity” is.