Otsu City has been promoting the Sustainable Development Goals (SDGs) from an early stage. Please tell us about the circumstances that led to your promotion of SDGs at the municipal level. 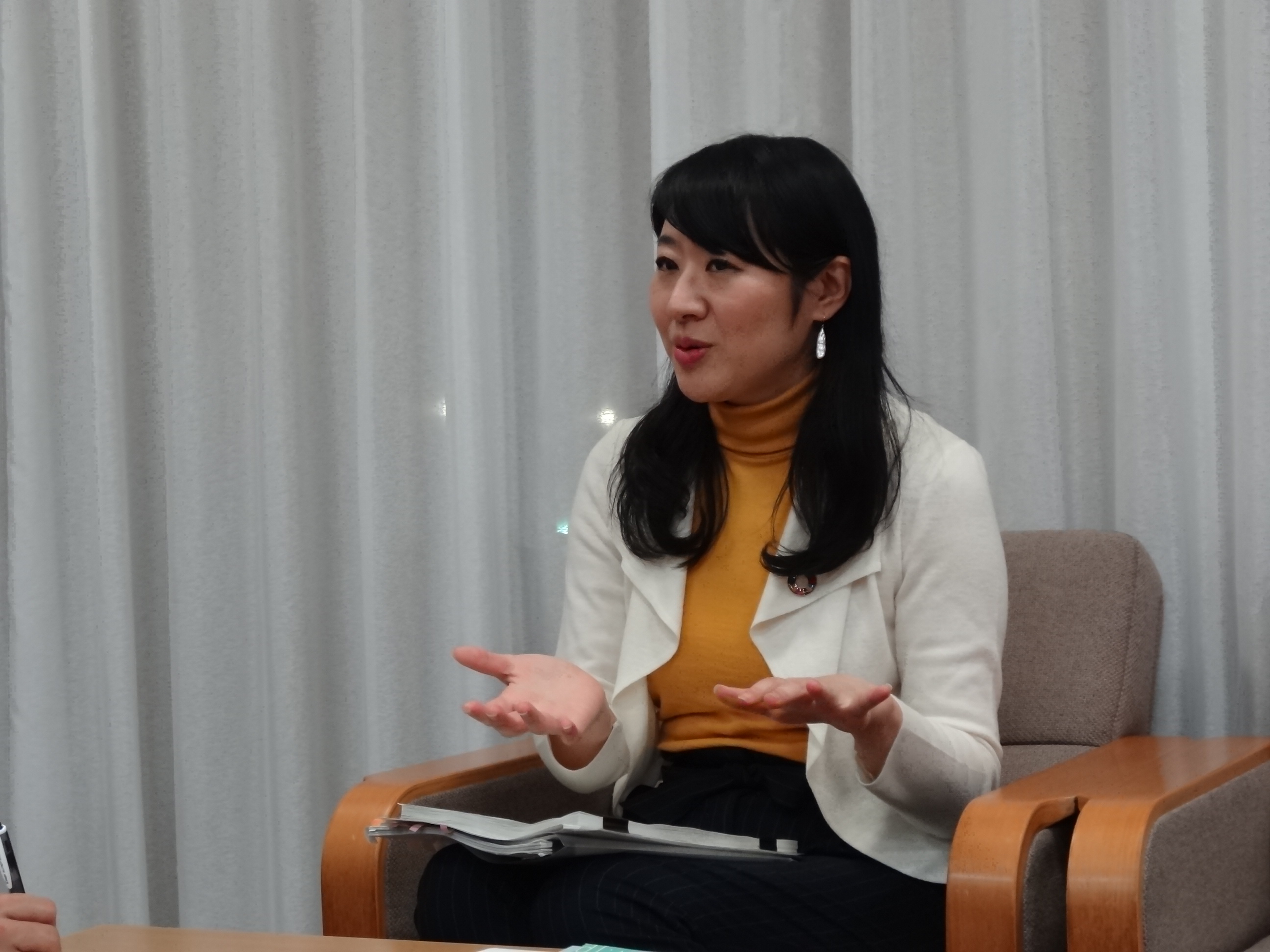 Here in Otsu, we first invited Mr. Takejiro Sueyoshi, Special Advisor to the United Nations Environment Programme Finance Initiative (UNEP FI), in February 2017 to train our staff concerning the SDGs, and started studying about the goals. In June of the same year, we invited Thomas Gass, Assistant Secretary-General of the United Nations, to hold a forum in collaboration with Shiga Prefecture; during his visit, he also went to a junior high school in the city and talked to junior high school students about SDGs. At that time, he told the students in an easily-understood way about the indoor shoes they were wearing being made overseas, and how the manufacturing of the shoes could lead to environmental destruction – or instead to the environment being protected – depending on how they were made. His doing so gave me an opportunity to reaffirm that SDGs are not stories of some distant planet, but actually an indication of how our daily lives are intrinsically linked to the world. Following up on these opportunities to learn about global issues, in April 2018, we invited Ms. Alice Waters, a “food” activist from the United States, to Otsu. Alice told us about the importance of slow food, and how it is crucial to grow vegetables using organic methods; she also viewed the “Edible Schoolyard” at a school in our city.

From outside the city, we get the impression that Otsu is actively moving initiatives forward in areas in which Japan has been weak internationally. Some examples are the “Otsu Rainbow Declaration” to promote societal understanding concerning LGBT (lesbian, gay, bisexual & transgender) individuals, and “Otsu Project-W”, which aims to eliminate the gender gap. Please tell us about the actual effects of these efforts, as well as the problems and perspectives that you have seen while working on them.

When I was working as a lawyer in Tokyo, I saw the reality of how difficult it is to balance child-raising and work. After that, I worked at a U.S. law firm, and was surprised by several things: that there were many female partners (i.e., managers); that men also got paternity leave of about a year; and that there is a societal philosophy that children are not to be raised by women only. This caused me to think that, “I want to help create a society where women can choose {their own balance of career/family} freely.”, which was the motivation for me to run for mayor.
As an example of what we’ve accomplished, over a period of six years, by increasing the number of nursery school facilities, and also increasing the number of spots available for admission by approximately 2,300, for three years in a row starting from 2015, we were able to reduce to zero the number of children waiting for admission at the start of the fiscal year (FY). In the past, the situation in which the job-participation rate of women often depended upon their age group (with the mid-20s being the point from which females started dropping out of the workforce – essentially drawing an “M-shaped curve”), was also seen in Otsu. However, through such improvements in nursery schools, Otsu City was able to escape the “M-shaped curve” situation. This is an initiative in accord with SDG #5, “Achieve gender equality and empower women and girls”.
Part of our efforts to achieve the above goal involved striving to increase the number of male employees at Otsu City Hall taking childcare leave. By submitting childcare participation plan documents to managers, employees’ work schedules can be adjusted from an early stage, creating an environment where male staff are assured of getting ten days of “child-raising leave for men”. Regarding long-term childcare leave for male employees, whereas they used to almost never take such leave, the number of male employees taking paternity leave to care for children reached approximately 10% of all fathers, as of FY2016. Still, it is impossible for government alone to create an environment throughout society where both women and men can balance work and child rearing. While also obtaining the cooperation of corporations and others, we would like to promote childcare leave for men, and increase the number of management positions held by women.
Concerning LGBT individuals, in response to the fact that the number of foreign tourists coming to Otsu City has increased fourfold in the last four years, we are also promoting efforts such as training for staff at hotels and inns concerning respectful interaction and treatment of those guests. Also, at city hall, we conduct training which partly involves city employees making direct inquiries to LGBT individuals, in order to take into account their views and needs.

Please tell us about Otsu City’s efforts towards sustainable regional development, and the situation regarding collaboration with non-administrative entities, such as those incorporating citizen cooperation.

Specifically regarding SDGs, in order to reduce “food loss” – i.e., edible food which ends up being discarded uneaten – we are working on encouraging a ‘doggy bag’ movement, in cooperation with eating and drinking establishments in the city. A major reason for this is that food waste comprises a large portion of the city’s overall waste disposal volume. From such a point of view, we believe that the ‘doggy bag’ initiative can contribute to solving environmental problems. Regarding implementation, while referring to the standards indicated by the Ministry of Health, Labour and Welfare regarding the taking home of food, we publicize relevant information by having posters put up in restaurants and bars in the city.
As for paper waste, it has also comprised a large ratio of the city’s total waste – equivalent to the ratio of food waste. Therefore, we have started to distribute free of charge “garbage bags for miscellaneous (scrap) paper” printed with images of SDGs to citizens who go shopping in the city’s shopping areas. Over the past five years, Otsu City has reduced its total volume of waste by 10%. Some reasons cited for this success include efforts involving the squeezing of moisture out of food waste, as well as the sorting of wastepaper. In addition, we are commencing efforts to separate small paper waste that until now has been thrown away as burnable garbage. These kinds of initiatives cannot be carried out without civic partnerships, and in my opinion are definitely examples of cooperation.

Lastly, in the future, what kinds of problems do you want Otsu City to be able to solve by utilizing SDGs? Also, it would be appreciated if you could tell us about the prospects for resolving those issues.

We feel that the perspective that anyone can take part in the implementation of SDGs is extremely worthwhile. For example, activities contributing to society have typically been carried out by retired people, but recently college students have been working towards the achievement of SDGs, which helps build more connections between those university students and society. We feel that SDGs will be a mechanism to encourage the participation of young people and companies in socially-contributory programs. Also, regarding gender equality and LGBT individuals, we hope to carry out initiatives triggered by SDGs at universities and other institutes of learning, thereby engaging with more young people.