Please tell us your thoughts on the municipal planning carried out by Semboku City regarding “SDGs FutureCities”. 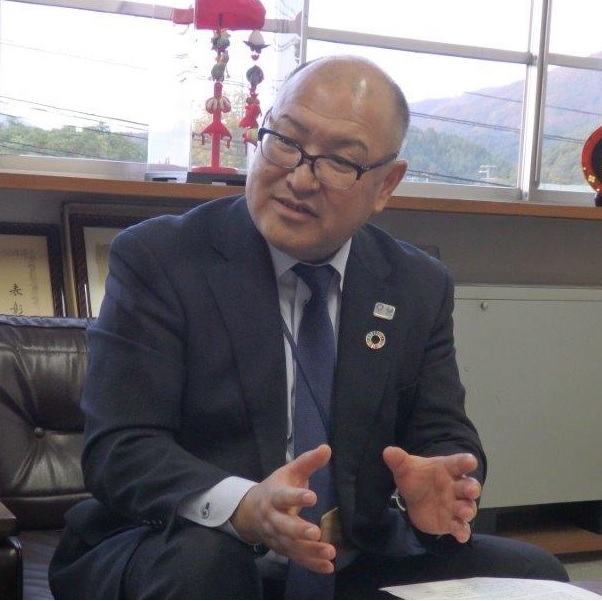 We are proud to have been selected as one of the 29 “SDGs FutureCities” municipalities nationwide, and our city’s citizens are willing to promote the SDGs in unison. Semboku City has heretofore implemented sustainable city planning, because we have felt that it is meaningless if only the city remains – which I think in a way relates to a common principle of SDGs that, “No one will be left behind” (marginalized). We feel strongly that as a city designated as one of the SDGs FutureCities, as well as a national strategic special zone, we want to take advantage of Semboku’s strengths and be a pace-setting municipality within Akita Prefecture. What we are aiming for is our ‘ideal model’ for 2030 – i.e., a city where we advance a style of city planning which has a spirit of town pride through collaboration between citizens and the municipal government, and that citizens will actually feel a richness in daily life as a “small international cultural city”.

Please tell us about the background behind, and process of, the establishment of Semboku City’s SDGs Promotion Headquarters.

Noticing that movement on the Sustainable Development Goals (SDGs) in various circles was becoming quite active, we decided to promote the SDGs as a city, and gathered information on the goals. At that time, in February 2018, we learned about the public recruitment for “SDGs FutureCities” by the Cabinet Office. In addition to being designated as a national strategic special zone, we saw this as an opportunity to accelerate efforts at regional revitalization, and submitted our application on March 23, 2018. Although recognition as one of the “SDGs FutureCities” was uncertain, promotion of SDGs overlaps with the city’s comprehensive plan, and we thought the city should implement this in a proactive manner. We then established the “Semboku City SDGs Promotion Headquarters”, in which the mayor is the chief director, and each department manager is a member.

What are the challenges Semboku City is facing, and what measures are being taken to deal with them?

Going forward, we are thinking to actively promote SDGs, and also want to promote the following items, based on our population vision & comprehensive strategy:
① While agricultural workers have been aging, the monetary value of agricultural production is on the decline. To deal with this, by utilizing Internet of Things (IoT) technology, agricultural productivity can be improved such that even farmers who are getting older will be able to cultivate more land than ever before. We hope to realize ‘smart agriculture’ which can lead to increases in production value, and new farming employment opportunities for young people.
② Although it is necessary to work at deterring youth out-migration, Semboku has not been able to provide attractive jobs, and our efforts thus far have not resulted in highly-educated former residents returning to our city, nor other well-educated individuals from outside moving/staying here. On the other hand, by popularizing the use of hydrogen energy, we anticipate new business entrants even to our manufacturing sector – which has until now been weak – thus leading to the promotion of industry in our city.
③ Economic activity is stagnant in Semboku, with the city’s gross output in 2014 having a growth rate of -1.0%, so there is a big gap compared to the national economic growth rate. Therefore, it is necessary to promote new industries, and increase the production value of our core industry, agriculture. On the other hand, we think that by utilizing IoT technology widely on farms, it is possible to construct business models and provide ICT-related employment that is appealing to young people and others, which can result in the ongoing population declines ending, and an increase in the number of people who move to the city, and settle here.

Promotion of agriculture-focused IoT and hydrogen energy-related industries not only promotes SDGs on the economic side, but also contributes to environmental preservation by revitalizing local communities due to increases in the productive populations, as well as helping eliminate the problem of abandoned farmland thanks to improved agricultural productivity – resulting in more value being derived from each field. Therefore, I would like Semboku City to actualize the ‘Super City’ concept, which provides benefits in these areas.

In November 2017, Tohoku University’s Graduate School of Environmental Studies succeeded in extracting hydrogen without using electricity, by using water from the Tamagawa Onsen (Hot Spring) and aluminum. Because Tamagawa Hot Spring’s water is strongly acidic and at a high temperature, it can generate hydrogen without emitting CO2, and we expect this to become a new energy source. As guidelines regarding the utilization of hydrogen energy in citizens’ daily lives and in the area of agriculture, we revised the “Semboku Community New Energy Vision” which was formulated in 2007. We are creating demonstration models incorporating various possibilities for utilization of the hydrogen production from the hot spring, and eventually we will aim for “local production, local utilization” on-site.

Could you discuss the city’s ties with educational institutions working towards the environmental recovery of Lake Tazawa, and the results thereof?

Since 2011, Omagari Agricultural High School’s Biotechnology Department has been conducting research on the neutralization by electrolysis of water in Lake Tazawa. In 2016, we concluded a collaborative agreement with the high school, and together with local elementary schools, we have been researching issues such as the effects that neutralization using electrolysis has on living things (killifish). Although it will take a considerable amount of time for Lake Tazawa to be regenerated, the environmental education which is derived through collaboration with local students, and focused on the lake, communicates the meaning of Lake Tazawa’s regeneration to the children who will play prominent roles in the future; since it also begins the handing over of the issue to the next generation, we think this effort is extremely important. It is an ardent wish of Semboku’s citizens to regain an environment where kunimasu fish (black kokanee) can live again. We think that this collaboration is effective for sharing this major work across generations.
In order to grasp the current situation, we have collaborated with organizations led by Akita University and the National Maritime Research Institute since 2015, and have conducted large-scale surveys such as water quality surveys and lake bottom observations. This survey information was also provided to researchers at the Japanese Society of Limnology, which held its annual meeting near Lake Tazawa in September 2017, with approximately 200 lake researchers attending. As a result, research teams from Akita University, Hokkaido University, Nihon University and Shinshu University began conducting regular academic surveys at the lake.
In the future, it is necessary to formulate a medium- to long-term plan in which industry, academia and government collaborate, but I think that technical and scientific insights regarding the revitalization of Lake Tazawa will be compiled through ties with academic research institutions, and can be reflected in the study of appropriate measures. In October 2018, we got the opportunity to make a presentation regarding the revival of Tazawa Lake at the Lake Session of the World Lake Conference. We wish to utilize such opportunities to accelerate the progress of the movement for Lake Tazawa’s revival.

Please tell us about how Semboku City has benefited from its efforts to disseminate information domestically and overseas about the city’s ojects, as well as during the promulgation and expansion of those projects.

Upon receiving the selection as an SDGs FutureCity, we established collaborative arrangements with Higashi-Matsushima City of Miyagi Prefecture and Iidemachi Town of Yamagata Prefecture, and moved to launch the “Tohoku SDGs FutureCity Summit”. On November 24, 2018 we will hold a “SDGs FutureCity Declaration Mini-Symposium” in our city and introduce our projects related to the goals. It is now said that major companies which are not focusing on how to meet the SDGs are creating management risks for themselves, and we feel that it is necessary to collaborate well with companies that want to develop corporate social responsibility (CSR)-related activities through the SDGs. Since our selection for the “SDGs FutureCities” group, we are honored to have received inquiries and proposals regarding collaboration from many related organizations and companies.