Mayor Izumiya, first of all, please tell us about the circumstances and results of Suzu City’s Sustainable Development Goals (SDGs)-related selection process, starting from the city’s responding to the call for municipal applicants, up to Suzu’s selection as one of the “SDGs FutureCities”. We would also like to hear your thoughts concerning the SDGs FutureCities. (73 Japanese characters) 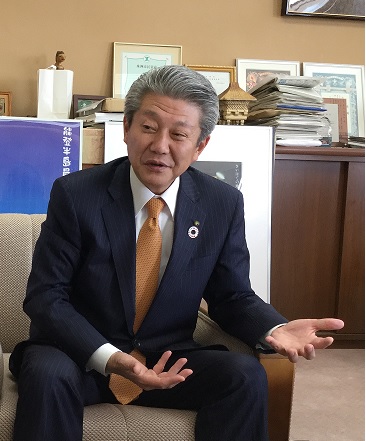 Since 2006, when I was elected mayor, the biggest problem in our city has been its population decline. Back in 1954, the population of Suzu City was 38,000 people, but now it is less than 15,000. In order to halt the continuing decline in population, we knew it was first necessary to revitalize the regional economy and to prepare a working environment for young people. Therefore, considering the strengths of Suzu, we thought about how to increase the number of people interacting in the city by focusing on “food”, including ingredients and food culture, in combination with the development of the agriculture, forestry and fishery industries. As one part of this, there are communities which are producing “yose-dōfu”*, making use of the “Ohama soybeans”(in Japanese) native species, to help rejuvenate their communities. Here in Suzu, we built roadside stations**, established facilities for selling produce throughout the year, and have had relevant personnel go to Wajima City and Kyoto to practice the making of tōfu. On a personal note, I came back to Suzu City on a ‘U-turn’, so I was shocked by the lack of activity in the Noroshimachi area prior to the construction of the roadside stations. Instead of mainly governmental support, we worked together with citizens to build a roadside station in Noroshimachi in 2009, which resulted in the area being revitalized. This has been a highly-successful experience for me and Suzu City.
* yose-dōfu: a kind of tōfu which is scooped and put into a container directly, without soaking in water
** roadside stations: places where visitors can enjoy unique local specialties, rest a bit, and get local sightseeing information

Meanwhile, in order to help develop a Suzu City-specific brand, we came up with ideas aimed at creating a city which coexists well with nature. With this in mind, in 2006, Kanazawa University set up the Satoyama Satoumi Nature School***(currently Kanazawa University Noto School) in a previously-empty school building. From the following year, we were able to begin a human resource development project utilizing that school. At the beginning, it was a place for administrative officials, agricultural cooperatives officials and others in Oku-Noto to learn, but the number of participants from Tokyo and elsewhere outside the prefecture has increased, the project has become active, and currently there are 165 graduates. At the same time, Noto’s satoyama & satoumi were designated as Globally-Important Agricultural Heritage Systems by the Food and Agriculture Organization (FAO) of the UN.
*** satoyama: terrestrial-aquatic landscape ecosystems comprising secondary woodlands, plantations, grasslands, farmlands, pasture, irrigation ponds and canals;
satoumi: marine-coastal ecosystems comprising seashore, rocky shore, tidal flats and seaweed/eelgrass beds. (cf. http://www.fao.org/giahs/giahsaroundtheworld/designated-sites/asia-and-the-pacific/notos-satoyama-and-satoumi/en/)

In this way, we have been engaged in human resource development projects in cooperation with universities. However, as we were considering ways that we could also work with research institutions with the goal of enhancing the organizational performance of banks and other businesses located in Suzu, we obtained the participation of United Nations University, and applied to the public recruitment of the SDGs FutureCities based on our Noto SDGs Lab proposal, which is centered around the platform functions of industry, academia, government, and finance. Our application was successful,and, Suzu was certified as one of the SDGs FuturCities by the Cabinet Office of the Japanese Government. (837 Japanese characters)

Can you discuss the outline and features of SDGs-related efforts unique to Suzu?

In addition to the Noto SDGs Lab that I mentioned just now, we are carrying out: conservation and utilization of biodiversity in satoyama & satoumi; our human resources development project at Kanazawa University Noto School; and international cooperation efforts such as other human resources development projects being carried out in Ifugao Province in the Philippines. Also, we are working at promoting the realization of SDGs through collaboration with Kanazawa University, in demonstration experiments for autonomous vehicles, as well as regional promotion with the help of the Oku-Noto Triennale art festival. The Oku-Noto Triennale is in a category which is difficult to visualize any efficacy towards the continuation of a peaceful world which the SDGs aim for, but I believe this is a case where we can utilize the power of art towards this objective. The importance of art tourism is discussed even in the United Nations, and I feel that art is an important tool which can be beneficial in various fields.

Furthermore, we are considering how to revitalize the economy while continuing our efforts related to the environment and society. For instance, with the goal of realizing ‘smart welfare’, demonstration experiments of self-driving vehicles are being carried out throughout the city; these have focused on the main streets, totaling about 60 km of roads. This is very similar to the efforts towards the development of a transportation system by the city of Boston (Massachusetts, U.S.) and Uber which includes self-driving vehicles, and I feel that these projects are truly among the most advanced efforts globally in this field.

In the context of renewable energy, wind and solar power generation systems installed in Suzu generate enough power to cover the entire city’s electricity needs. Indeed, it is no exaggeration to say that the electricity in Suzu City is made from wind. However, in fact, we sell electricity to Hokuriku Electric Power Co. to derive income for the city. In this way, we grasp how the SDGs are connecting the achievements we have realized with the tasks we have ahead of us.

Please tell us about the creation of a sustainable community in Suzu City, and cooperation taking place between the city and other entities.

Just now, we are striving to ascertain the needs of enterprises in the city by carrying out surveys through the Chamber of Commerce. In addition, since 10 years ago, we have been strengthening ties with academic institutions by concluding agreements with Kanazawa University, Ishikawa Prefectural University, Kanazawa College of Art, and Kanazawa Seiryo University. One result of those collaborations has been the demonstration experiments of autonomous vehicles in the city, with the objective of helping realize a ‘smart welfare’ system. The Noto SDGs Lab, a one-stop solutions center for local issues that combines the platform functions of industry, academia, government, and finance, just opened in October (2018), and I think that going forward, it will be a place where feedback from both within and outside the city will be received. We feel that it will take quite a while until these efforts in the area penetrate, and results are obtained. I think that the history of various actors having been connected by vested interests has been long, but in order to realize an ideal overall society – encompassing the environmental, societal, and economic realms – through SDGs, I think that each and every stakeholder needs to keep the idea of a sustainable society in mind, and cooperate with one another.

Lastly, by utilizing SDGs in the future, if there are any new issues you would look for, please mention those issues, as well as your perspective on prospects for resolving them.

Until now, we hoped that children who grew up in Suzu City and learned in our human resource development projects would come back to Suzu, even if they temporarily left for further studies, etc. To that end, we also carried out ‘hometown education’ in school; however, thinking from the viewpoint of SDGs, we gained an additional perspective that it is necessary to produce individuals who actively participate internationally. I feel it is possible that our efforts to solve the problem of our city’s decreasing population can, through SDGs, contribute to solving global problems.