What are your thoughts concerning Toyama as one of the “SDGs Future Cities”? 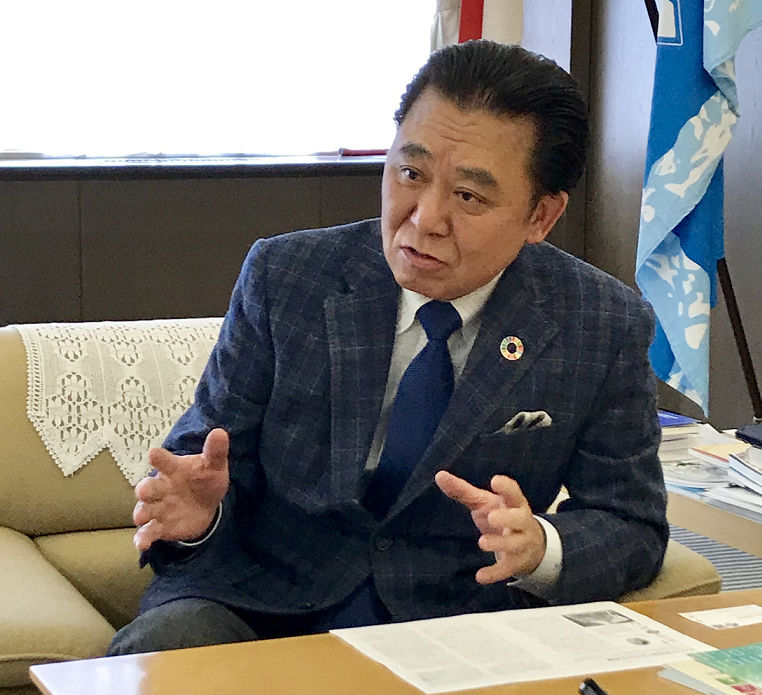 I have a very deep conviction regarding the Sustainable Development Goals (SDGs), and if we consider indirect influences as well, I think that Toyama City can actually contribute to the achievement of all 17 SDGs. Our environment-related work thus far has been evaluated highly, with Toyama designated as both an “Eco-Model City” and an “SDGs Future City” by the Japanese government’s Cabinet Office. Also, the city was selected as one of five compact cities internationally for a case study done by the OECD, was designated by the United Nations (UN) as representative of the “Sustainable Energy for All” initiative, and was the first Japanese city to be included in the world’s “100 Resilient Cities” network by the Rockefeller Foundation.

In terms of overseas cooperation, we provide technology to developing countries for small hydropower generation projects using differences in elevation between rivers. Utilizing this technology, it becomes possible to generate electricity locally, and cultivate rice which can be sold at high prices by operating rice milling machines there using that electricity. Will this not contribute to the elimination of poverty?

Regarding problems with waste, due to topography, trash almost never drifts here from the Asian nations on the far shore (across the Sea of Japan); therefore, it can be inferred that the plastic waste in Toyama Bay is flowing in via agricultural-use water flowing into the Jinzū River, etc., and from small rivers carrying domestic wastewater. Although it is difficult to deal with the downstream area of a Class A river* like the Jinzū River managed by the country or the prefecture, we are thinking that we would like to start by setting up log booms in small rivers under city management, and collect the floating debris that has flowed in via those rivers. Therefore, we are now studying how to conduct survey projects to gather data on places where we can set up such log booms. In this way, it is important to not remain too long in the vision/planning stages, but to move on to actions, in order to produce results.
Class A river*: a river which has been designated as being of special importance because of economic and/or other reasons, and is protected by the government

Next, please tell us about the background and achievements leading up to the execution of the representative compact city-related initiatives among the “SDGs Future City” urban planning measures being implemented by Toyama City.

In urban sprawl situations, where downtown areas have spread out to the suburbs, roads and sewer systems, etc., get extended to those suburbs, with the result being that administrative costs such as maintenance and garbage collection increase. However, in the compact city strategy centered around public transportation, when you visit the city (‘go out on the town’) with friends, instead of the conventional situation where each person uses their own car and returns home without drinking alcohol, you can switch over to a higher-quality daily life that will allow you to enjoy some wine during the concert intermission. In addition, when utilized by grandparents and grandchildren together, all public facilities in Toyama City are free of charge. When grandparents go out with their grandchildren, consumption increases. These kinds of fresh ideas are necessary. This project is spreading to other communities within the prefecture, and citizens of communities which have entered into agreements with Toyama City can mutually use public facilities in the other community for free. As a result of implementing this policy, opportunities for elderly people to go out have increased, as have the numbers of healthy elderly citizens – leading to a reduction in medical expenses. In this way, even if some citizens are unaware of problems faced by the city, through the implementation of policies that move towards resolution of those problems, a city will see increased utilization of public transportation, and citizens will cooperate in sorting garbage, will understand the meaning of renewable energy and take advantage of a subsidy system encouraging the adoption of sustainable energy sources, and more. As a result, we think that such a municipality will become one which as a whole contributes to the achievement of the SDGs.

Furthermore, so that people will want to live with their families rather than as just single employees stationed here temporarily, we decorate the city with flowers, have a good child-rearing policy, and take care to maintain a stylish atmosphere. In fact, the number of students at elementary schools in the city’s central area is increasing, indicating a situation where the child-rearing generation is getting out of a society where cars are overwhelming. I feel that Toyama City is gradually approaching a sustainable situation.

Please tell us about the situation regarding collaboration with non-administrative entities, such as through sustainable community development and civic cooperation in your city.

One example is if farmers fill their paddy fields located within the city limits with water, they get paid 10,000 yen per 10a, even without cultivating any rice. If rice paddies in a mountainous area are abandoned after cultivation, during heavy rains, water often flows quickly into urban areas in the downstream area, causing flood damage. Therefore, by maintaining such paddy fields between mountains, we are attempting to utilize the so-called “green dam function” for preventing disasters. Also, in areas with plains, with the cooperation of farmers, the city pays 13,000 yen per hectare to cover the costs of having drainage pipes from the paddy fields reduced in size in order to restrict the outflow of water. As a result of these efforts, urban inundation in the downstream area no longer occurs. Though such efforts themselves may be modest, we have been able to establish partnership relationships where local residents, including local government officials, help one another.

Please tell us about how Toyama City has benefited from its efforts to disseminate
information domestically and overseas about the city’s projects.

In contributing to developing countries, we continue to cooperate with local companies to transfer technology, such as assisting with small-scale hydropower generation in the Tabanan Regency, Bali, Indonesia. We are proceeding with a project to supply some small, high-performance rice-polishing machines, which are to be powered by some of the electricity generated from four small hydroelectric power generation systems we completed in the area last year (2017). In Semarang City, Central Java Province, we are also working on a project to convert 72 diesel buses owned by city public transport operators into buses with hybrid engines that can run even using CNG (natural gas). I think that among the 29 SDGs Future Cities, Toyama City is prominent in cooperation overseas. Certainly ordinance-designated cities provide support for large cities overseas, but Toyama is actively supporting small cities in island countries. For example, for situations where local areas have no large rivers, installation of small-scale hydroelectric power generators utilizing agricultural-use water may not seem like that much, but the projects are in demand, and we feel the efforts have value.

The reason Toyama City’s efforts gained international attention is that the city was selected as one of five model ‘compact cities’ worldwide by the Organization for Economic Cooperation and Development (OECD). Municipal efforts to improve citizens’ daily lives in a regional city like Toyama were recognized internationally; this has raised the level of civic pride, which is a major benefit.

I believe that successes due to starting steadily with what we could do have led to our city’s recent selection as a SDGs Future City. In the future, as well, we won’t just run in place, nor will we waver in continuing to implement our policies.