【Toyooka City】 An Interview of the Leader of a Municipality Aiming at Achieving the Sustainable Development Goals (SDGs): Mr.Muneharu Nakagai, Mayor,Toyooka City
2019/06/8

Please tell us about your initiatives on environmental conservation in Toyooka City, and your ideas and efforts taken towards realizing a sustainable society, which is the objective of SDGs. 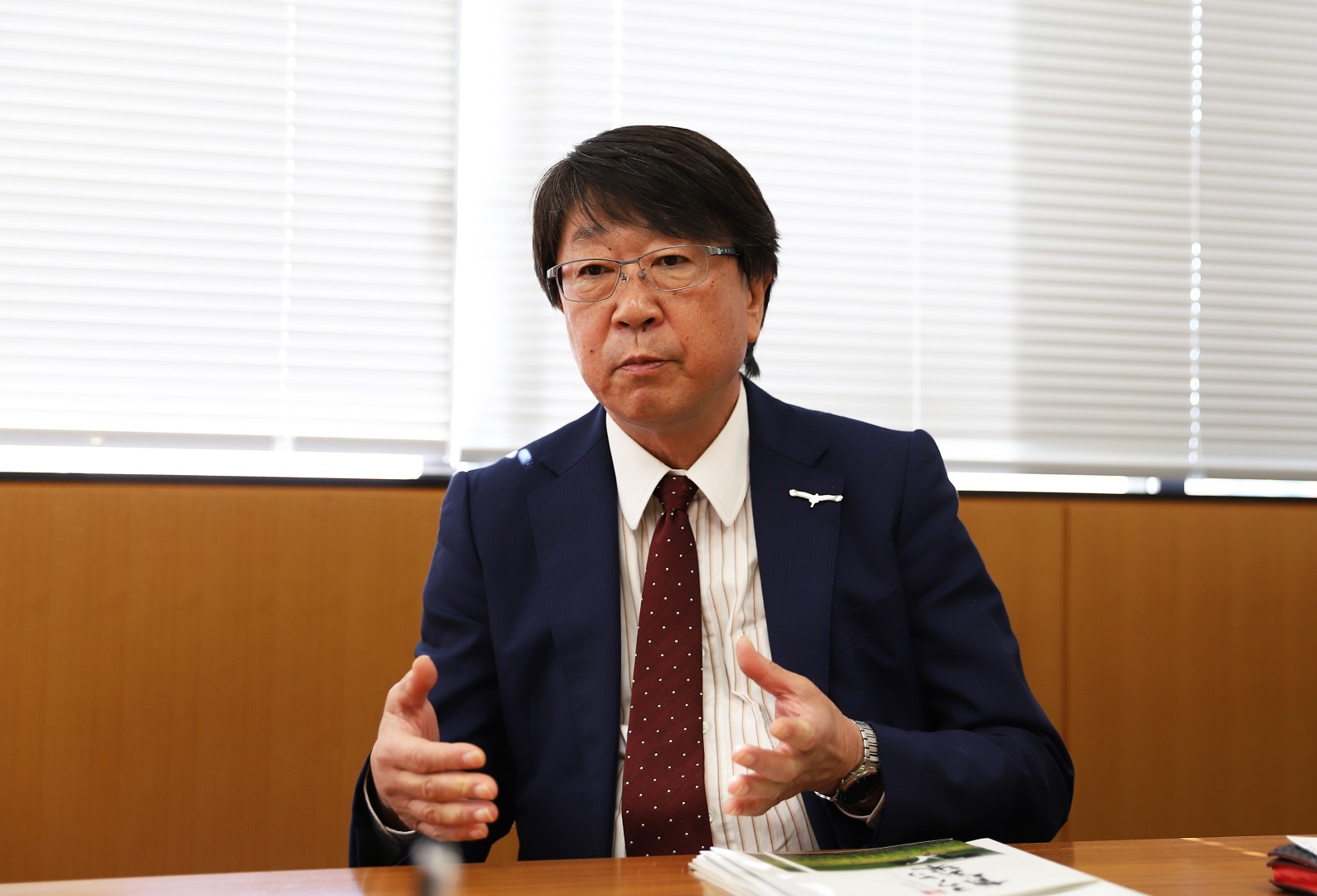 Toyooka City’s urban development has clearly focused on “aiming to become a small global city”. The word “small” is translated in English as “Local”, so our goal is described as becoming a “Local & Global City”. Even as we are deeply rooted in the local community, we also hope to shine in the world. Keeping that in mind, the basic idea in our city planning is that we aim to create a community where residents are proud to live, even if Toyooka is a small city. One of the conditions for becoming a local & global city is the carrying out of thorough initiatives to benefit the environment. Our systematized strategy for ‘shining in the world’ is based upon such environmental efforts. A symbol of that is our initiative related to Oriental White Storks*.

When I began to propose the reintroduction of Oriental White Storks to the wild in our area 27 years ago, rural areas were pushing hard to rectify disparities with the cities. However, I thought that through the protection of the Oriental White Stork, an endangered species, our city could indeed shine globally. Not only that, by utilizing the stork – a symbol of a rich life – as a centerpiece, “creating a rich environment in which storks also can live” would be well understood internationally.

In this case, the phrase “storks also” is meant to encompass references to both “you” and “your children and grandchildren”, as well as “the economy”. To achieve results in environmental conservation requires long-term efforts, increasing the number of partners, and ensuring that the environmental actions themselves are sustainable. For that, it is best to have “the economy” on your side. It’s a method like this: At the moment a city resident sees a scene where Oriental White Storks are flying, and is left with the impression, “What big birds! They’re majestic!”, someone quickly whispers in the resident’s ear, “If you build a city where storks also can live, you will make money.”

Traditionally, in Japan there was a view that making money from the environment was something shameful, but in Toyooka City we advanced an environmental economy strategy. We started to say, “It’s OK to make money with the environment”. With the phrase “storks also”, it became easier to take a step into this sphere of thinking; then the concept that, “It’s all right to make money with the environment.” allowed us to take a further step in this direction.
* The Oriental White Storks can be seen at the Hyogo Park of the Oriental White Stork (http://www.stork.u-hyogo.ac.jp/).

Please tell us about Toyooka City’s efforts towards sustainable regional development, and the situation regarding collaboration with non-administrative entities, such as those incorporating citizen collaboration. Also, please tell us about the problems you’ve faced as you’ve moved your initiatives forward, as well as how you view prospects for the future.

The best example is the aforementioned reintroduction of Oriental White Storks to the wild. In order to protect something that currently exists, bans or regulations can be utilized. But to regain something which was lost, it is necessary for people concerned to feel they need to take action. For that reason, we had repeated conversations with area farmers.

In the aftermath of WWII, even farmers using agricultural chemicals were desperately searching for ways to provide food amidst the dire food shortages of the time. At the time, in order to harvest crops efficiently, the utilization of agri-chemicals for the elimination of insect pests and weeds had a certain rationality. Still, the farmers also felt tension, as they obviously wanted to provide food which was safe for their families, grandchildren and others to eat. So instead of unilaterally renouncing the past, if we think about the future together, we finally will be at a starting point.

In our city, we have been advancing two ideas – “Establishing systematized techniques, and agricultural methods which do not rely on agri-chemicals”, as well as “The branding of ‘Stork Natural Rice’ ”. This process involves the collaboration of numerous stakeholders: farmers, specialists, Hyogo Prefecture, JA{-ZENCHU, the Central Union of Agricultural Co-operatives}, city hall, etc. Given that we really want to work together as partners, we think that instead of working “broadly with citizens”, first the process of cooperating with the stakeholders involved and broadening the scope of projects is important. City hall is planning to establish partnerships with outsiders in areas where the municipality is lacking, and build teams together in order to achieve results.

The challenge is to ascertain which partners are best to collaborate with. The city hall must carefully assess who to join up with in order to achieve its goals. Future tasks include discerning such things as the honesty of both sides, mutual motivations, abilities, etc. In other words, a major challenge from now on will be the need for city hall overall to become perceptive. In order to raise the ability levels of our staff in this regard, we dispatch staff to organizations such as: the Ministry of Economy, Trade and Industry (METI); the Ministry of the Environment (MOE); Rakuten; JAL; etc.

Please tell us what kinds of initiatives you are carrying out related to urban development, industry, etc. which concern the issues of “society” and “the economy”, and which aim to solve problems in environmentally-conscious ways through the utilization of SDGs. Also, through the utilization of SDGs, what problems in Toyooka City do you want to deal with?

One area where we are clearly conscious of SDGs is in regards to eliminating the gender gap. We have set “Create a liberal city which accepts diversity, in which residents support one another.” as a condition of our local & global city, and are focused on strategically eliminating the gender gap. The trigger for this was when we looked at the rates of young people returning to our city (so-called ‘youth recovery rates’). Data clearly showed that women were not moving back to Toyooka City once they had left. Why not? We thought that it was because, “Toyooka City is a male{-focused} society”. Over the past decade, large urban enterprises continued to improve working conditions for women, to make it easier for them to work. However, during that same period, our city had become even more of a male{-focused} society. Therefore, an even greater gap had emerged. We feel that if this problem is not dealt with, the sustainability of the city itself will be low.

In this way, if these kinds of problems are not regarded as issues for the whole region to deal with, then SDGs overall will not be seen as that relevant to residents. Therefore, we feel that SDGs are effective in order to see things from a more global perspective.